nicholas b jacobsen
path
"Enter ye in at the strait gate; for wide is the gate, and broad is the way, which leadeth to destruction, and many there be who go in thereat; Because strait is the gate, and narrow is the way, which leadeth unto life, and few there be that that find it."
The psychological/spiritual path I was raised with is this "strai(gh)t and narrow" one. Now I understand a path as an inbetween space. It is more about a balance than a clinging. A path divides a space, creating a left side and a right. It also connects the whole of the space and every other path it touches. When understood as a whole, a path can hold a simultaneous omnipresence as it is so many places at one time.
In 1967, Richard Long made a temporary path in a grassy field by walking in a straight line, back and forth, until the line was visible to his camera. This work began his work of "walking as art." The humility of this act, when compared to works of Robert Smithson and Michael Heizer, suggest a gentleness that seeks to be a part of the land, rather than a force upon the land. This ephemeral, embodied kind of practice laid the path for works like mine to be considered "art." 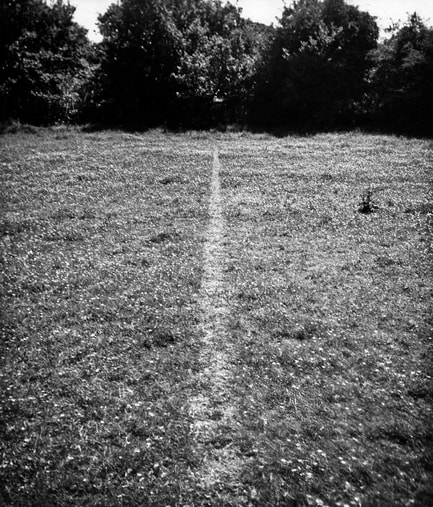