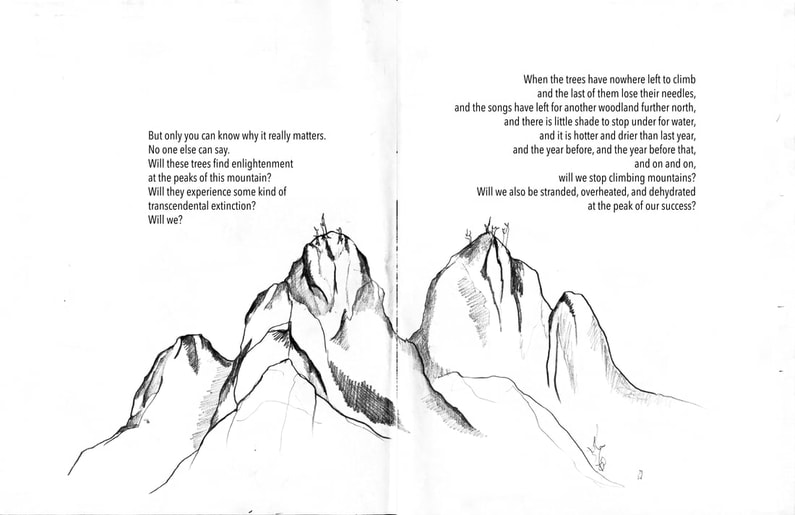 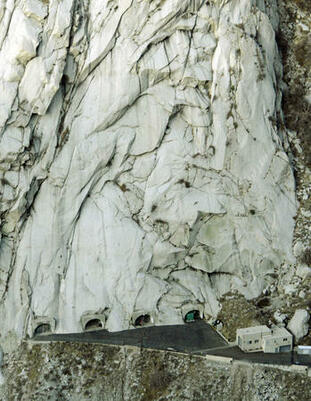 Granite Mountain Records Vault
mountain / valley
Mountains are often symbolized as obstacles to overcome, and, like the desert, a place to test the strength of men. Some humans project their desire for characteristics like strength, stability, and immortality onto mountains as, compared to humans, mountains seem to have these traits. In the desert, mountains are especially valued, as these "sky islands" are often sources of timber, water, and cool temperatures surrounded by an ocean of drier, sparsely vegetated, hot desert. The mountain that stands in the center of the land that this story is about, was named 'Pine Valley' by my ancestral people, who colonized this area. This mountain, possibly the largest laccolith on the planet, lifted the layers of sedimentary sandstones which then eroded, shaping the landforms that shaped me. Pine Valley mountain sits at the edge of the Great Basin, Colorado Plateau, and Mojave Desert. Because of its place inbetween these ecoregions and its inbetweeness as a desert mountain, it holds the most botanical diversity in Utah, housing manyspecies endemic to this area.
In Transcendental Extinction on the Organ Mountains, (illustrated by laura c carlson) I connect the desire to achieve progress and/or transcendence, to the symbolic gesture of mountain climbing, to the upward migration of alligator junipers on the Organ Mountains. Many of us humans seem to desire a certain kind of progress and growth above all else, to the point that these desires are pushing us and our more-than-human kin rapidly toward biological annihilation. We also often climb mountains seeking transcendence, to be above the mundane and chaos of earthly life. In Buddhism, Nirvana can be experienced as the transcendental extinction of desire or ignorance. In this work, I wonder, "Will these trees find enlightenment / at the peaks of this mountain? / Will they experience some kind of / transcendental extinction? / Will we?"
"Mountains are considered places of strength and here at the Granite Mountain Records Vault (GMRV), one things is certain, beneath the granite sentinel that tower overhead," the "world's largest collection of genealogical records...will be preserved for generations to come." Family is a central part of LDS theology. They believe, in pre-earth life, we were arranged in the same family groups we were born into on earth, and that, by following the gospel and rituals of the Church, we will be in these families again in the afterlife. Since the Church is just under 200 years old, many ancestors died before the church existed. So, LDS perform the required rituals, like baptism, as proxy for the dead. For these reasons, these records are of sacred importance to the CJCLDS. Even though they were able to destroy parts of the mountain to make this vault, they believe this mountain can protect these records "from destruction by the elements, the ravages of time, and the destructions of man." Much like the Church's financial records and temples, the GMRV is not open to the public. Though, the genealogical records are made available through familysearch.org, which I am currently using to research my ancestry.


Another mountain/valley, Mountain Meadows, is/was a stop along the Old Spanish Trail, especially during the Gold Rush. In the fall of 1857, tensions from previous persecutions and the threat of attack by the U.S. military reached a breaking point in the Utah Territory. On September 11, everyone in the migrant Baker-Fancher party deemed old enough to remember were massacred at Mountain Meadows by the Utah Territory Militia of Iron County. My Greatx4 and Greatx3 Grandfathers, Joesph S. and John D. Hunter, were members of this militia at this time. Because of the lies and secrecy surrounding this event at the time, I have no way of knowing for certain whether or not they participated in the massacre.
Finally, as I work with these mountain/valleys that form the foundation of my upbringing, I think of Pema Chödrön's words about mountains and valleys: "Spiritual awakening is frequently described as a journey to the top of a mountain. We leave our attachments and our worldliness behind and slowly make our way to the top. At the peak we have transcended all pain. The only problem with the metaphor is that we leave all others behind. Their suffering continues, unrelieved by our personal escape. On the journey of the warrior-bodhisattva, the path goes down, not up, as if the mountain pointed toward the earth instead of the sky. Instead of transcending the suffering of all creatures, we move toward turbulence and doubt however we can... At the bottom we discover water, the healing water of bodhichitta. Bodhichitta is our heart--our wounded, softened heart"