nicholas b jacobsen
extermination / excommunication
Both of these involve removal of something unwanted. In 1838, Lilburn Boggs wrote Executive Order 44 calling for the extermination of all the Saints in Missouri because of violent confrontations over claims to land. In 1850, Special Order No. 2 called for the extermination of the Timpanogos people to make possible the LDS colonization of what is now Provo, Utah.
The CJCLDS removes unwanted church members through excommunication. "Excommunication is the most severe Church disciplinary action. A person who is excommunicated is no longer a member of the Church. Church authorities excommunicate a person from the Church only when he has chosen to live in opposition to the Lord’s commandments and thus has disqualified himself for further membership in the Church." To the LDS, excommunication not only impacts their life on earth, but also their life in heaven. They are denied the privilege of eternal family life. Often LDS academics are excommunicated for publicly voicing any research that challenges contemporary church doctrine, official history, or its practices. In a 1993 speech, Boyd K. Packer, President of the Quorum of the Twelve, the second most powerful body in the CJCLDS, listed "the gay/lesbian movement," "the feminist movement," and "the scholars" as the three major threats to the Church. When asked about this quote in the PBS documentary, "The Mormons," Packer responds by laughing and saying, "If it's in print, I said it." 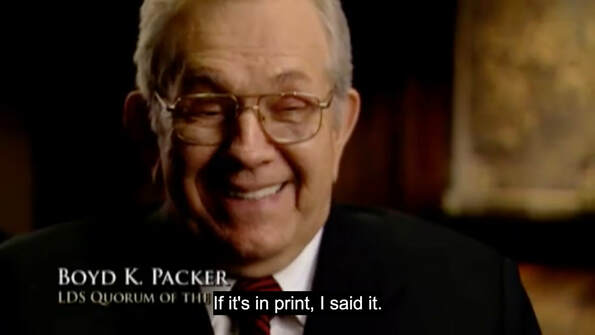 still from, "The Mormons"
I wonder, how do we deal with unwanted parts of our society in a manner that can help heal all those involved? Most institutions are set up to deal with problems via removal--can we make room to deal with problems through rehabilitation? Could this cut through the cycle of abuse that is evident in this story, and throughout the world?
​
see also: baby and the bathwater, body, the Church, decolonization, Deseret, ebb / flow, kin(d), land, myth, problematic, remember / memory / memorial, there / their, Ut(ah/opia)