nicholas b jacobsen
​Lamanites
These were a "white, and exceedingly fair and delightsome" people from the Book of Mormon who serve as the primary antagonists of the story. They rebel against their father, their righteous brother Nephi, and God. Because of this they are cursed with "a skin of blackness." The CJCLDS teaches that nearly all indigenous peoples of this land are descendants of Lamanites. LDS mythology includes the idea that in order for the Second Coming of Christ to occur, all Lamanites need to be converted to the Church. When they are converted, their curse of dark skin will be lifted and they will be again a "[white] pure and delightsome people." This conversion is/was so central to the CJCLDS that some of the first LDS missions ever were to the indigenous peoples in New York, and then in Ohio, as is depicted in the image below. 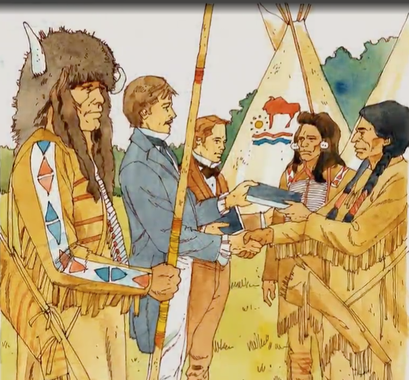 "A mission to the Lamanites"