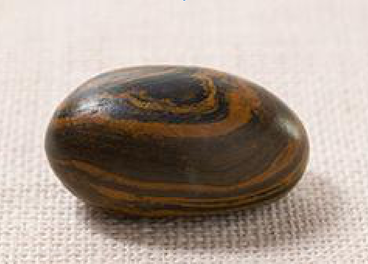 Joseph Smith's seer stone
magic / ritual
Magic is generally frowned up in the CJCLDS as it is discussed in the Bible and Book of Mormon as one the "works of the flesh" and is a form of worshiping false gods. That said, magical happenings, called miracles, are an integral part of the CJCLDS. For example, the founder and first Prophet of the CJCLDS used rocks called "seer stones" to find more valuable rocks like gold or silver. When he found the Gold Plates on which the Book of Mormon was inscribed, there were a pair of magic rocks called the "Urim and Thummim." These magic rocks were left with the Gold Plates to help whomever found these plates to translate them. Much like the "Forever Problem" concerning how to mark our nuclear waste deposits in a manner legible to whomever may find it for the next 20,000 years, Moroni, the Book of Mormon burier, had to leave some way for the finder to read the language that would most like die before these records were unearthed. Joseph Smith only used the "Urim and Thummim" for one chapter of the book, then switched to his "seer stone." I don't think Moroni could have know that Joseph would have his own magic rocks.

Also common in the CJCLDS is the practice of ritual. In their Temples they perform sacred rituals that symbolize the covenants they make with their God and the Church. I plan to perform embodied rituals with and for the land and the camera to symbolize my critiques of some of the CJCLDS's ideologies and practices, as well as the covenants I make with the land that I was raised by and that I love. Some of these rituals will involve singing as sound can have magical effects. The "Germanic word for magic formula is galdr, derived from the verb galan, 'to sing,' a term applied especially to bird calls." Like religious chanting, the embodied practice of singing, which is central in the CJCLDS (see Mormon Tabernacle Choir), can have healing effects for the body producing these sounds as well as any bodies that listen to the sounds. In fact, the word heal is defined as "(To) cause (a wound, injury, or person) to become sound or healthy again." So, perhaps as these vibrations permeate different bodies, they may also become sound or healthy.
Specifically, I want sing for the land called Mountain Meadows with my Mom. There, our mutual ancestors were part of the massacre of ~120 people. I hope to use sound to help heal the ancestral trauma held in this place and in our bodies. My Mom will sing Amazing Grace while I sing I'm set free by Lou Reed. Together our voices will blend and hold the complexity of our different and complimentary spiritual desires and ideologies and, hopefully, aid in the healing of the bodies--living, dead, biotic, and abiotic--that make up this place.